Share:
Although it may seem relatively new, coil-fed cutting 2D parts is a reasonably old practice and isn’t, for that matter, a process linked to laser. 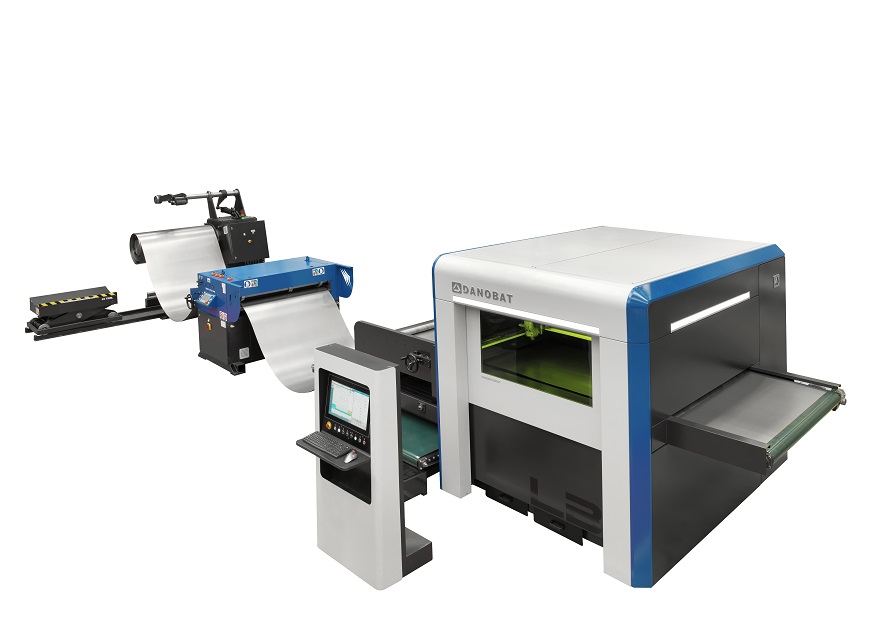 In fact, the first coil-fed machines, instead of pre-cut standard formats, were plasma machines and, more specifically, machines aimed at the ventilation and aspiration sector (HVAC) given that they mainly used thin layers, 0.6…1.2mm, generally supplied in the coil format.

However, with the rise of fiber laser, its cost savings, its "ease" in terms of manufacturing and, subsequently, its drop in price and popularization, this market niche has paved the way providing quite a few advantages over the conventional laser that uses pre-cut formats and has a fixed work table.

Here, we’re mainly going tofocus on cutting with laser technology, although everything could all be applied to any 2D cutting technology (primarily plasma). We must remember that these machines are aimed at a specific market niche, that of thin sheet metal and with high production levels.

Continuous format cutting (coil), improves on some problems encountered with the conventional laser, including:

Coil-fed machines don’t suffer from this handicap given that they feed the cutting area continually.

Given that it’s an "unlimited" format, the scrap metal left over from pre-cut formats is reused in the next work area. Depending on the types and mixtures of parts, you can save as much as 10% of the material.

Parts of "any length" can be cut: Fixed-bed machines limit the maximum length of the parts to the size of the beds, in a coil-fed machine, this limitation is eliminated.

Coil-fed laser cutting reduces the price of the material compared to purchasing it in       formats (blanks). If we add to this the optimization of time, we find ourselves with a      system that is well-suited to large volumes of repetitive pieces

But, just as with any new process, there are specific questions that need to be answered:

-          Evacuation of parts: If the sheet metal (coil) is moved, along with the parts that have already been cut, this can cause the material to collide with the machine’s surroundings.

-          Evacuation of scrap generated: During the cutting process, mainly when cutting holes, pieces of scrap are generated that may, once again, cause the material to collide with the machine’s surroundings.

-          Coil changing time: Despite the time improvements achieved by this process, if you had to change the material and/or thickness of the parts very regularly, changing the coil may become a bottleneck.

Each manufacturer has developed their own "solutions" to these first 2 issues: hatches for evacuations, micro-fasteners, skeleton destruction, etc…, and it will be interesting to see which methods are most popular in the market.

Continuing with the type of machine developed for the continuous cutting of material (coil), there are two groups:

-          Machines that cut with the material stationary: These machines unwind a section of coil and supply a work area. At this work area, the machine works in the same way as a normal fixed or closed-bed machine, moving the bridge and the head in XY. When all of the parts have been cut in the work area (some parts may have been partially cut because they are longer than the work area or they are between two areas), the machine unwinds the coil again and moves/repositions the sheet metal.

-          Machines that cut with the material moving "on the fly": These are obviously the most productive machines, but they are also the most complex/expensive.

Typically, given the fixed forward speed of the coil, at the work area, the bridge moves with the cutting head in XY, making high cutting rates possible.

To achieve higher cutting rates, these machines have been equipped with several cutting heads (2 or 3) allowing each head to cut a different part of the same piece simultaneously and achieving very high cutting rates.

These machines were destined to compete with traditional press cutting "blanking" lines. In fact, they are often called "laser blanking" and they have been mainly seen in the automobile, OEMs and TIER1 market, although it should be emphasized that, given the versatility of laser, this solution can be applied to any sector that requires a high cutting rate of parts.

-          There is also a small group of machines where the cutting head is fixed to a shaft, only moves in a cross-cutting direction when the sheet metal moves forward, and the sheet metal/coil moves forwards and backward, these machines are, obviously, more cost-effective, but have failed to have much of an impact on the market.

Lantek offers programming to help get the most out of the machine’s capabilities.

Once again, software plays an essential role given that it not only controls but also provides the process with sufficient intelligence so that it can connect the different agents that intervene on the line. 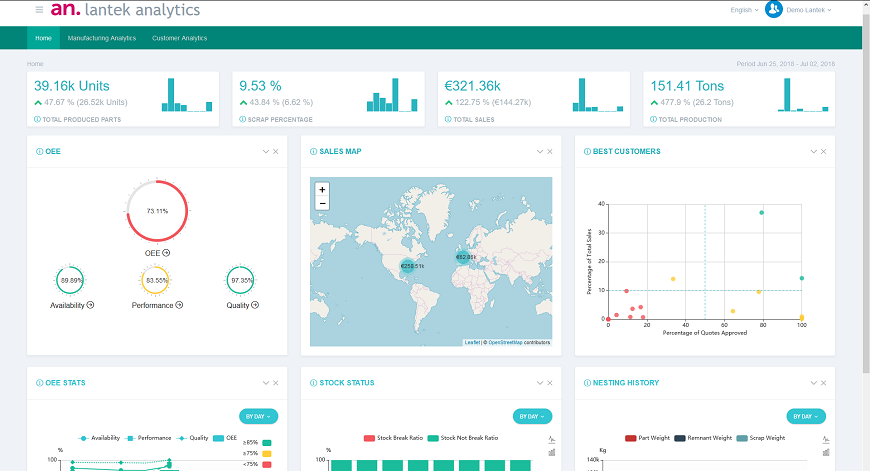 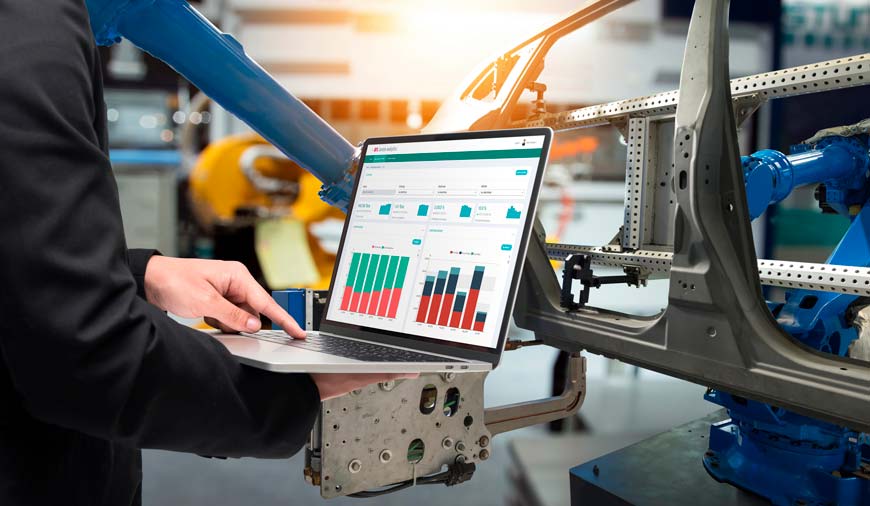 The automation of processes in sheet metal plants, lever for competitiveness

Even before the pandemic, the automation of processes in sheet metal plants was a lever for competitiveness, but now, following the impact of Covid, it has become an indispensable competitive advantage for any factory that wants to survive scenarios as disruptive as the ones that we are witnessing. 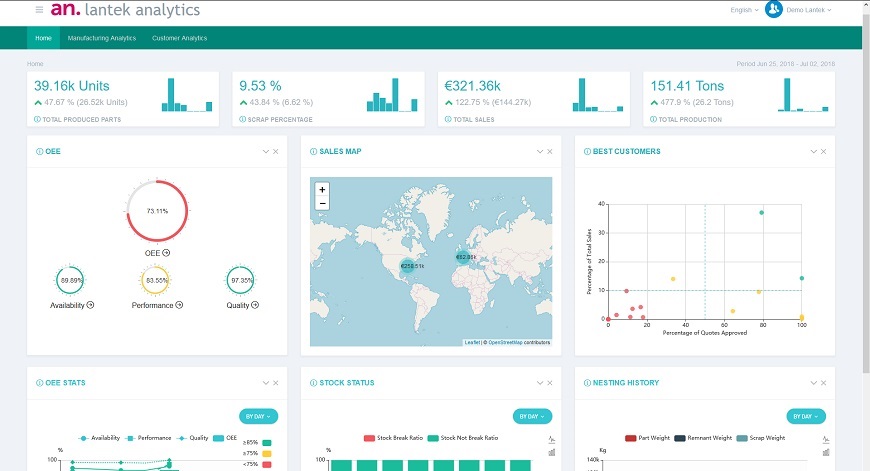 When Data is at the service of manufacturing intelligence

The Digital Factory is much more than a concept or an increasingly widespread expression, it’s a methodology aimed at the 21st-century company, a company that simply must be linked to technology and digitization.