Share:
In its effort to boost new technologies and as the leader in the international CAD/CAM market, Lantek has developed “Touch&Play” a Lantek Inside module encompassing more than 35 years of experience from Lantek in the sheet metal processing industry and new augmented reality technologies.

Although Lantek Inside is not a new product, Lantek has been working on it for over 4 years and offers machinery manufacturers a software solution to include in their controls, with significant advantages, among which are the ability to edit machined parts right at the machine, generate newly machined parts, add or remove parts, etc. This gives the end operator more versatility to maximize the use of the materials and execution times, thus reducing the response time, because changes can be made at the machine without having to go back to the office to make these adjustments. Apart from reducing the generation of unnecessary documentation, since all the information about the machined parts is in the software, we can forget printing the trays. The direct connection between the office software and the plant software allows the operators to have the information on the work to perform as soon as the work is generated.

As if all of these advantages were not enough, Lantek has gone one step further in the development of new technologies, adding “Touch & Play” functionality to this versatile product. With “Touch&Play,” reusing leftover parts with complex geometries, something usually complicated, becomes trivial thanks to the new augmented reality system.

A camera installed in the machine will show a live image of the leftover part to use; and, by means of an intuitive interface, the desired parts may be positioned on the sheet. The system shows the parts virtually positioned on the actual sheet, which allows the operator to avoid holes or damaged areas.

The system provides the option to import parts from previous machining processes, optimizing the user’s response to the usual production needs to redo damaged or lost parts by using any previously generated small leftover pieces without intermediate procedures, such as sheet alignment and measuring, thus significantly streamlining production processes.

Thanks to this new functionality, Lantek Inside has become a powerful ally to reduce costs and improve efficiency. Lantek has positioned itself once again as a spearhead in global technological innovation. 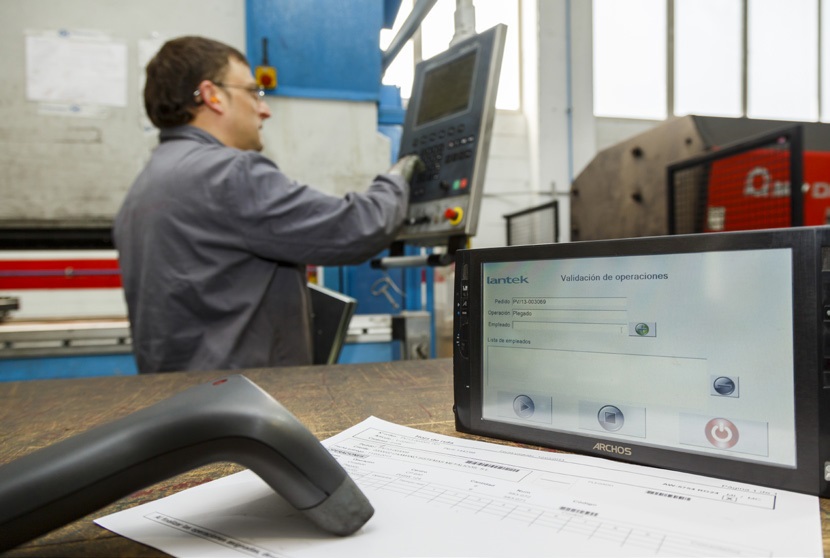 What do we ask of our factories? Efficiency and maximum quality. To do this, we need a plant data collection program at the operator’s post, the objective of which is the monitoring, control and validation of each one of the manufacturing processes, from reception of the order to the completion of production. And all of this, of course, in real time and automated, so that production can be performed with greater agility and optimization. Without administrative tasks that cause delays and can even lead to mistakes.

Innovation in the production of tubes and piping parts

Transporting water, protecting cables, channeling energy... There are round ones, square ones, rectangular ones or open profiles. They’re everywhere, from electrical appliances to awnings, including canopies, trailers or all types of machinery for the industrial sector. They are also manufactured in different materials, but the one we’re interested in is metal. For some time now, the tube manufacturing industry has been playing an increasingly central role in the plants, ceasing to be a complimentary and limited activity to become a large-volume production which incorporates complex structures and assemblies thanks to the improvements introduced in cutting machines and benders.

Predictive analytics, an oracle for your business

Business Intelligence systems are increasingly part of the daily reality of our business as a tool to make better real-time use of the data we handle so that we can make better decisions, prevent errors, anticipate new needs and develop new business models.