Lantek participated in the ConfeBask business meeting organized by the Basque Business Confederation with the Ministry of Science and Innovation and the Government Delegation in the Basque Country. 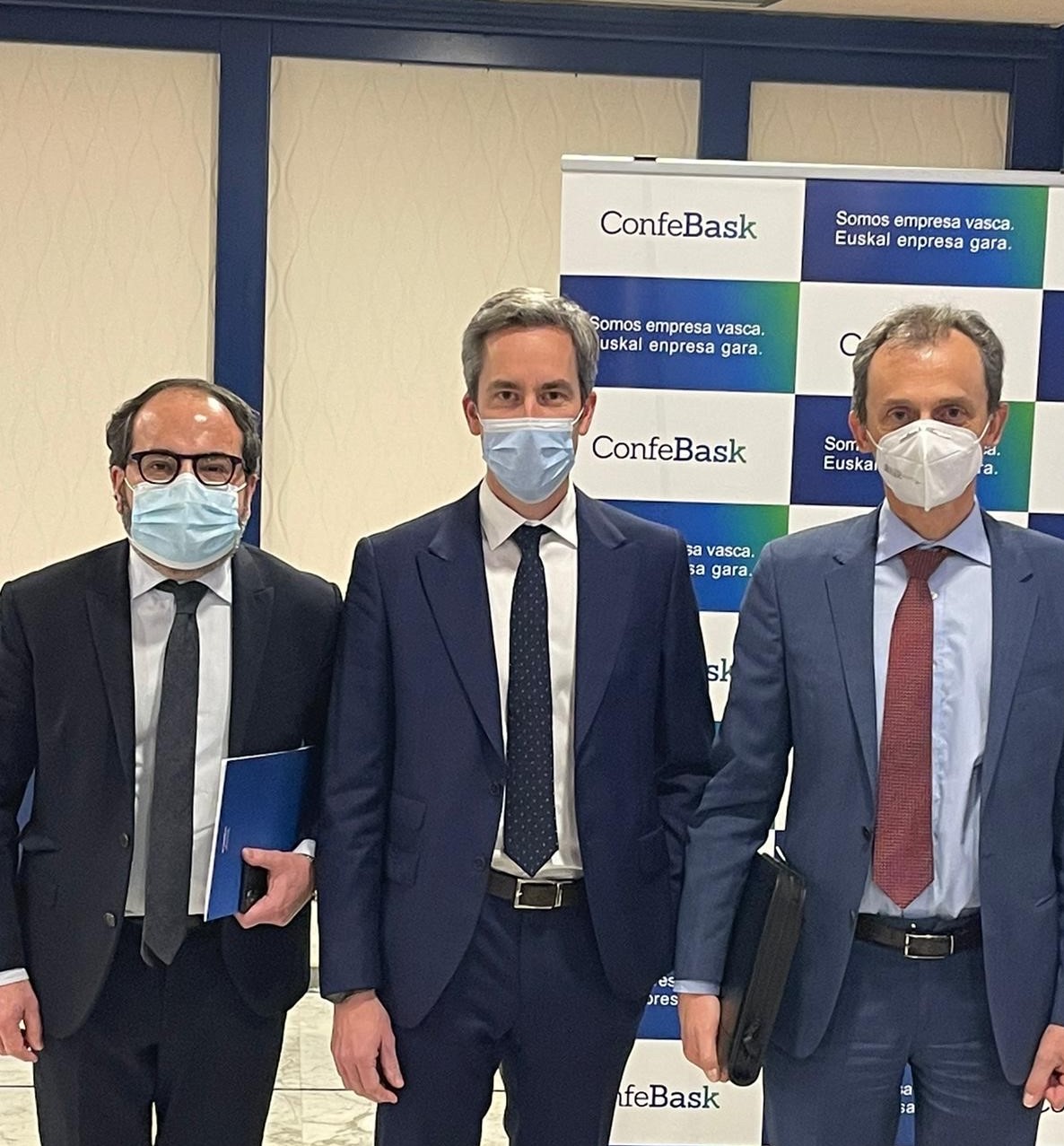 The meeting was attended by the Minister of Science and Innovation, Pedro Duque, as well as a large delegation from Confebask, headed by its president Eduardo Zubiaurre, and a representation of invited Basque technology companies, including Lantek. The event was also attended by the presidents of Adegi - Eduardo Junkera - and SEA - Pascal Gómez - as well as the directors and general secretaries of Adegi, Cebek, and SEA.

During the meeting, the Minister of Science and Innovation recalled the general lines of his department’s budget for this year which, according to official sources, represents the largest direct investment in R&D&I in absolute terms in Spain, reaching 3.232 million euros. He also highlighted the Science and Innovation Pact signed with scientific, academic, business, and social associations.

Basque business representatives had the opportunity to share their experiences and areas of action in the field of R&D&I and their expectations for the future. They also had a chance to exchange impressions and explain the challenges faced by the Basque business fabric, in addition to defining and outlining possible lines of action to reinforce the commitment to innovation.

Lantek, invited by SEA, took advantage of its participation in this meeting to share its strategic commitment to R&D and talent in the STEAM field. Lantek also offered its support in the materialization of innovation projects applied to industry. Lastly, Lantek committed to continuing its pedagogical approach in helping metal fabrication companies understand the importance of digital transformation processes. "It is time for the digital transformation of industry," stated Alberto López de Biñaspre, CEO of Lantek, during his presentation.

Lantek: A history of continuous innovation

Founded more than three decades ago with a presence in 14 countries on 5 continents, Lantek has a long history of innovation to its credit. This commitment has allowed it to evolve and position itself as a leader in the field of Industry 4.0 and a key reference in advanced manufacturing and software solutions for the fabricated metal sector.

"Our company’s vocation is none other than to turn metal fabrication companies into smart factories, providing them with more flexible production systems, real-time planning, and tools to optimize increasingly complex production processes and the material consumed. All this is possible thanks to innovation and the result is improvements in efficiency and competitiveness for the companies that opt for it," explained Alberto López de Biñaspre.

Lantek incorporates the latest technologies that allow connected, more efficient, and flexible factories to be set up, helping to boost the competitiveness of its customers. Its latest developments are in the areas of IoT, Big Data, and Artificial Intelligence to enable users to maximize their other raw material: data.

Lantek’s CEO gave a very positive assessment of this important meeting organized by Confebask and underlined its commitment to R&D&I, a strategic area for the company to which it dedicates over 15% of its annual turnover.

"To talk about Lantek is to talk about R&D&I. These acronyms are part of the company’s DNA and one of the main pillars on which our activity is based and which, as such, has a very positive influence on the growth that we continue to achieve, despite the uncertainties that the pandemic is causing in the economic landscape of our country and the rest of the world," said Lantek’s CEO.

"Innovation, talent, and knowledge are crucial elements for maintaining and improving the competitiveness and productivity of the Basque and national business fabric, which has a positive impact on economic growth and the well-being of society," added López de Biñaspre. "Committing to innovation and promoting public-private initiatives in this regard to break down the barriers that hinder progress is essential, as this is the only way we can position our economy as a benchmark by being more competitive and efficient.”

Lantek  is a multinational that is leading the digital transformation of companies in the sheet metal and metal industry. With its patented smart manufacturing software, it enables factories to be connected, turning them into Smart Factories. It rounds off its range of services with  CAD, CAM, MES, and ERP solutions for companies that manufacture metal parts from sheet metal, tubes, and profiles  using any cutting technology ( laser ,  plasma ,  oxycut ,  water jet ,  shearing , and  punching ) .

Founded in 1986 in the Basque Country (Spain), one of the main European hubs of machine tool development, Lantek enables the integration of sheet metal and metal processing technologies using the most advanced manufacturing management software. The company is currently the outstanding leader in its sector thanks to its capacity for innovation and commitment to internationalization. With more than 24,800 customers in over 100 countries and 20 offices in 14 countries, it has an extensive network of distributors with an international presence. In 2019, its international business contributed to 86% of its revenue.