Share:
As we all know, there has been much talk about automation in the manufacturing sector. Most of this automation has been geared toward replacing repetitive tasks, such as sorting of parts, by robots. Some manufacturers and employees in the field have expressed concerns and skepticism toward automation of these tasks. I pose the nay-sayers and skeptics one question. Why the negativity? 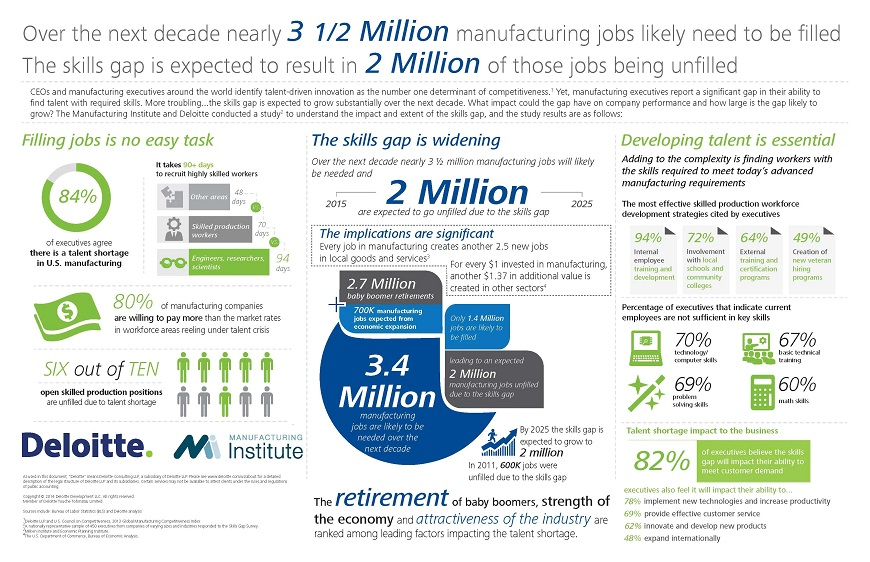 The manufacturing sector is currently experiencing a tremendous shortage of qualified skilled laborers. Our educational system has shifted from technical skill training to higher education. I’m not saying that this shift is a bad thing, however it emphasizes the need for a college degree to be successful in life.

This is the farthest thing from the truth. There are plenty of jobs in manufacturing that don’t require a degree and pay very well. Many of these shops also support continued employee education, as it increases their value to the company.

If we are having trouble finding qualified workers for manufacturing, then why would we get upset that automation is taking over the mundane, hard to fill tasks? According to a study conducted by The Manufacturing Institute and Deloitte, manufacturing is expected to see a gap of 2 million jobs to be filled by 2025. That is a staggering statistic!

So, how can manufacturers stay competitive when the talent pool is shrinking and there is a growing amount of jobs to fill? Automation! The benefits of automation outweigh the negatives. The shift toward automation will also help target those with higher education degrees. After all, someone needs to program and monitor the automation process throughout the shop.

To stay competitive in the evolving landscape of manufacturing it is essential to implement automation. Automation shifts the mundane tasks to robots while opening jobs that require problem-solving skills unique to humans. Would you rather pay someone to sort screws for 40-50 hours a week or pay them to find and solve bottlenecks, improving operational efficiency?